Sign up to get the latest on sales, new releases and more …

How to Frame a Paint by Numbers

If you're a paint by numbers fan, then you've probably bought one without stretcher bars. The stretcher bars make up that rigid frame inside the canvas (as opposed to the one that you put the canvas in when you're ready to hang it on the wall, if you are so inclined). A canvas is pulled around a wooden frame and then secured on the backside with staples. Or, if you're me, thumbtacks -- because I can't use an industrial stapler without wanting to throw it through a window. I mean, seriously. We have little bits of plastic the size of my fingernail that can run a whole car, but we can't develop a stapler that will work without having to hammer the staple in?

But I digress. If you get a canvas without the stretcher bars (the frame), painting it becomes a lot harder. In fact, if your canvas came folded in a box, the creases in the canvas can actually cause you to ruin your painting. So, although I know you're just dying to dip your paintbrush into that really pretty teal color you just spotted in the paint pot, taking the time to stretch the canvas first will pay off. Not only does it make the painting easier, you may need to iron the canvas to help straighten it out, and you will definitely have to put the canvas face down on a hard surface while you staple the back. After the hours you will spend perfecting your painting, do you really want to risk scraping all of that beautiful paint? Of course, just in case you love to live dangerously, I'll give you a few pointers on how to do it once you're finished. It probably goes without saying, but make sure it's dry first!

Some people might be discouraged at the thought of stretching their own canvas, but trust me...if I can do it, anyone can. All you'll need is four wooden stretcher bars (make sure to get the sizes that fit your canvas): a heavy-duty stapler (or hammer and tacks): 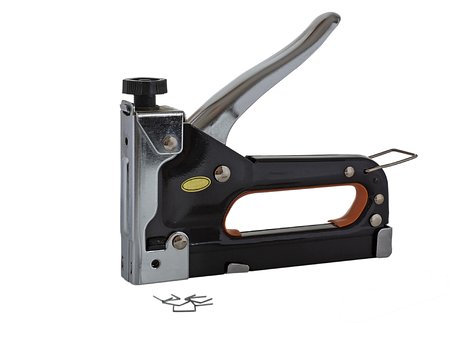 You should start by flipping your canvas over onto a hard surface. You want the picture side down. If you've already painted it, you might want to put a towel between the canvas and the surface. The next part involves a lot of pushing and some shifting, and that can scratch your paint. Don't worry if the canvas has wrinkles. They don't call those wooden bars "stretchers" for nothing. They'll pull most of the wrinkles out.

Carefully fold the canvas at each edge of the artwork and then spread it out flat again, leaving a slight crease at each edge that will show you where to place your frame.

Next, assemble your frame. There are slots on one end of each stretcher bar that correspond to flaps on the other end, so you can just slip the flap from one bar into the slot on another and push until it is well seated. Once you've got the frame correctly assembled, lay it on the back of the canvas. Move it around until the outer edges of the frame exactly match the creases at the outer edges of your artwork. Make sure you have at least 1.5 inches of material left on the back side to attach the staples to. If you have a lot more than that, you might need to trim the canvas down some to make it easier to work with and to make sure the staples are able to hold it firmly.

Fold the canvas over the back of one edge of the frame, double checking to make sure that the edge of the artwork lines up with the outer front edge of the frame. Tack the canvas down in one spot with a staple or tack. Then pull the opposite edge around the opposing side of the frame, pulling taught, and tack the opposite side in place. Repeat on the two other sides, pulling evenly and tightly as you go, and then add staples/tacks to the rest of each side, leaving about 1.5 inches of space on each side of the corner. Keep a constant check to make sure the front is even and tight.

Once you've tacked the sides, you can move on to the corners. They can be a bit tricky, so be patient and just keep working at it. Grab a corner, pinch it together so that the edges are touching, then fold it over to any side, forming a 45 degree angle. Add a staple to hold it in place, then fold it over again, tucking down the other end of the corner. Check the front to make sure it looks okay, then staple. It might not be perfect, but as long as it's tucked under from the front, it's fine. And that's all there is to it. Now you can dig into that teal paint!